BioWare provided SWTOR’s fan sites with information about Game Update 2.1 entitled “Customization”, the first update since the Rise of the Hutt Cartel digital expansion. Given what we were told, this update is focussed on a variety of features to add extra dimensions to customer customization. It seems that they are making this update all about quality of life, not surprising given the expansion gave us a solid chunk of new content.

Cory Butler features in the latest Old Republic Insider for April 2013, which touches on some of what’s coming in Game Update 2.1.

The Collections window will show you all of the items available in the game that are considered collectible. This includes armor sets, weapons, pets, speeders and toys from the Cartel Market, including the random items that are obtained through the packs. 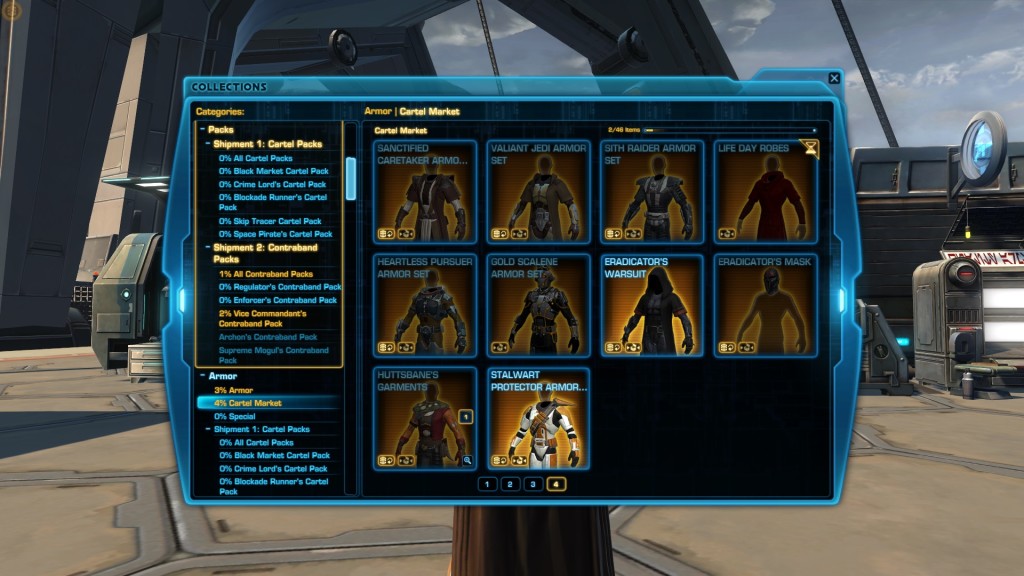 Once you have bound such an item to one of your characters, that item is considered to be in your collection. Your collection is account-wide, not limited to a character or legacy.

You can then pay a one-time fee (in Cartel Coins) for an item to unlock it, which means that you can freely create new copies of that item on any character on your account.

For example, if you obtained the Mask of Nihilus, you could pay the Cartel Coin fee to unlock it, and then create copies on all your characters regardless of server. You could even provide them to all your characters’ companions!

Probably more useful is that you could unlock a favourite speeder, and then never have to buy a speeder again for any alt you create… ever.

Once an item is in your collection, it stays there; you can destroy all copies of the item, and as long as you have unlocked it, you can always create more.

A given copy is (of course!) bound to the character that uses the Collection interface to create that copy.

The Pink Lightsabers blog did a Q&A with Cory Butler on this feature, in which he revealed the cost of a given item’s Collection unlock:

For pack items, the Cartel Coin cost is based on item rarity, and ranges from 60 to 600 CC. For direct-sale items, the unlock fee is a fraction of the item’s base price.

In Game Update 2.1, new Escrow Deduction items can be purchased from the Cartel Market, that allow a fixed amount of credits to be made available to the player from their escrow account. There are three types available:

The applicable credit cap does not affect credits transferred using these items. The items can be resold on the GTN.

Items will be sold on the Cartel Market which allow a character, a player’s legacy or a guild to be renamed. There is a 30 day cooldown applied to a given change in name.

These items can be sold on the GTN.

There will be a single (one per account), one-off complimentary Character Rename item provided to subscribers at or soon after the launch of Game Update 2.1.

The Appearance Vendor Kiosk can be used to alter a character’s body type, hair style, eye colour, scars, tattoos—effectively everything that is available in the character creator. A character’s species can also be changed, but not their class (or Advanced Class) or gender. 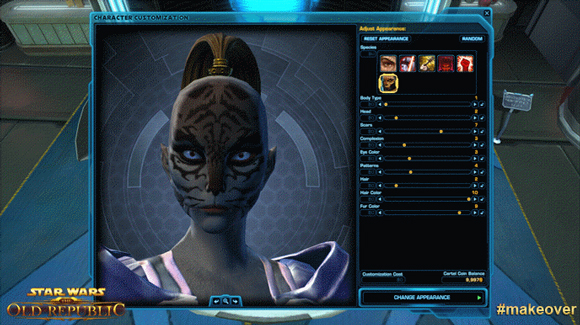 In addition, the existing options have been expanded (e.g., new hair colours and styles), and new options will be coming in future updates at a regular cadence. Their intention is that players can customize their characters to achieve their personal Star Wars fantasy.

Cory emphasised the role-playing potential of the Kiosk. His young, clean-cut Padawan would eventually grow into a war-grizzled veteran, adding a scar after a big battle, and slowly greying his hair as he ages.

The Kiosks are located in convenient locations on the Fleet and each faction’s capital world. More Kiosks may be added in the future.

All changes made using the Kiosk are paid for with Cartel Coins; there is no option to pay with credits. However, subscribers will enjoy a substantial discount of up to 50% off the cost of Kiosk changes. When activated, the Kiosk offers a full portrait view, equivalent to the character creator. The changes made are charged on a “per-slider” basis, so a single change (e.g., a character’s skin color) would be cheaper than changing their hair colour and style.

If you choose to change a character’s species, there will be a single cost that includes all customization options.

Update: SWTOR-RP has had some questions answered by BioWare, including the revelation that character name changes are also coming in Game Update 2.1, and will be found in Cartel Market’s unlock section.

The Cathar are a new species that can be unlocked for Cartel Coins via the Cartel Market or directly in the Appearance Vendor Kiosk. Based on this post, the cost of the Cathar would appear to be 600 Cartel Coins. This is an account-wide unlock, rather than being legacy-specific like the existing racial unlocks.

The Cathar will then be available to male and female characters of all eight classes (i.e., both factions). You can create new Cathar characters, or use the Appearance Vendor Kiosk to change the species of an existing character to Cathar. 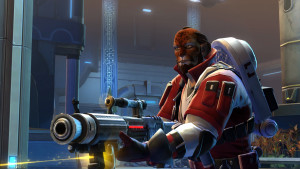 Damion Schubert told us that the Cathar you encounter on Makeb were designed using the updated, far more detailed appearance options that have been provided. This includes new fur patterns and hairstyles. Aric Jorgan, a Cathar who features prominently in the Trooper’s class story, has also had his appearance updated.

There is also a social emote, referred to as “Cathar pride”. We would guess this involves your Cathar roaring like a lion. 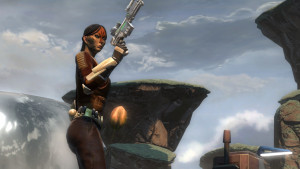 BioWare have released the Cathar Preview Video, viewable below.

Cory Butler was kind enough to answer some of our questions about Dye Modules, which you can read about here.