(Editor’s note: A listener who is mainly known as Ossa of Begeren Colony (the west coast RP-PvE server) attended the Community Cantina held in San Diego, California, on Thursday 17 July, and was generous enough to write up the following for us. Our sincere thanks to Ossa for the awesome work!)

I showed up at 6:15pm to The Commons Bar, where there were many visible Comic-Con attendees in sight. Some were even cosplaying as a Jedi Guardian and Sith Marauder, among other simpler things like handmade Twi’lek lekku wool caps. I got in line in what turned out to be near the halfway point. At about 7:15pm, showing my driver’s license got me a yellow bracelet along with the coveted Taun Fawn code card and a USB thumb drive.

We got one red ticket for a free drink, so perhaps it was less rowdy that the LA meetup, though perhaps people just bought more after the free one. I had a Bioware Blue Bellinis, which seemed like some sort of alcoholic homage to the famous blue Tatooine milk.

The Q&A started at around 8:00pm, after enough time for everyone to mingle and enjoy the drinks and food. Appetizers like popcorn chicken, fried mac & cheese balls, and sliders were available. Courtney Wood, Eric Musco, Bruce Maclean, and Damion Schubert were in attendance. Eric Musco did most of the talking, as well as repeated calls for silence in a vain attempt to make sure everyone could hear the Q&A. Bruce Maclean was tasked with answering all forthcoming PvP questions (much to his surprise!).

First question was will there be a PvP gear grind; the short answer was yes. No changes in the way gear is acquired. Eric Musco quipped it’s not a grind if you’re having fun. Better gear than Conqueror will be released at some point. It was my impression that Conqueror shells will be important to hold on to, unlike Elite War Hero when Game Update 2.0 came out.

Courtney and Bruce stated that the internal testing for the new Warzone Arenas, held on a bi-weekly basis, was quite fun. They used plural for arena at the time, and we now know there are three maps thanks to the USB thumbdrive pictures.

Bruce was upfront with mentioning that 1.7% of all queue pops are Ranked, and that on some servers they either never pop or only pop during specific time windows. He admitted its not currently a successful game mechanic. Warzone Arenas sounded like their answer to making Ranked play accessible to many more players. Someone shouted whether teams would be nameable, to which they quickly responded to wait for more information, with a heavy hint at leaderboards and a possible end to the Ranked pre-season 1. 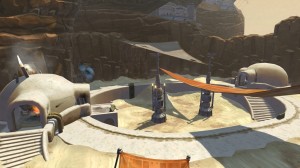 A synthweaving question was asked, inquiring about why the Reverse Engineering probability is different going from Prototype (blue) to Aritfact (purple) for 410-450 items versus pre-2.0 items. No real answer to that was given; they were then told to contact Amber Green on the official forums to ask the dev crafting team directly. Another question about why Aim barrels from a ranged weapon can’t go into (for example) Qyzen Fess’s techblade. They are aware of hilts/barrels being locked to weapon types, and seem to be evaluating changes to how hilts/barrels are transferred.

There will be no new class in the foreseeable future. A new Advanced Class would come first, but that is not in the pipeline.

Makeb was a success, and they are pleased with the Rise of the Hutt Cartel digital expansion. More planet story arcs are likely.

Asked if they would ever update cutscenes to acknowledge that the player is different species from the options that were available at launch (e.g., a Chiss or Cathar Jedi Knight), the answer was this wasn’t likely to happen. Getting voice actors back into the studio to record would be expensive, and apparently some cannot be found or are dead.

Companion gifts are not likely to be given on player starships anytime soon. That is because the system works with no target, with the gift going to the current companion who is present. On the player ship all companions are active, thus it would take some work sorting out a targeting system for companions gifts. They are aware of the annoyance, but it is considered a low priority fix.

The Super Secret Space Project question was asked, and Damion Schubert was ready for it. He said the project is now in an early playable state. That’s all he would go into on the matter. 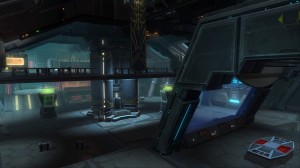 The final question of the night was about the much forum-debated PvP bolster. Bolster is still bugged, but most reports they get at this point are not actual bugs, but more along the lines of complaints.

Eric elaborated on why the level 54 Artifact (purple) crafted items are being bolstered more heavily than other gear: it has to do with the way Partisan/Conqueror gear handles stat budgets, which was also the same reason that Expertise was stripped from War Hero and Elite War Hero gear. Reverse Engineering implants from Premium (green) to Prototype (blue) to Artifact (purple) keeps adding stats without actually changing what the rating of the item is. This is different from Armoring mods, where purple is rated higher than green. Crafted Artifact item bonus stats over the Premium get bolstered more than intended, or at least are handled differently from the traditional orange shell pieces. It’s not really a bug per se, but a consequence of how the bolster system was designed. In other words, it seems like there’s no easy fix on the horizon for bolster to properly handle crafted items.

They know the implementation of bolster did not go smoothly at the launch of 2.0, but they feel they are getting close to where they want it. When asked whether they would hand out another set of recruit gear instead of relying on bolster, they described how many people new to PvP didn’t even know of the recruit gear or how to get it. Even if someone had the recruit gear, the gap between MK-2 to War Hero was too big. With bolster new players can jump right in and be more competitive. They want PvP to be more based on skill, on how you play your class and how you read other classes, rather than based on who has ground out more gear. Some shouts went unanswered as to how they don’t bolster the PvE side of the game. Game play just seems fundamentally different to the developers where the gear checks for Story to Hard to Nightmare operations just doesn’t translate into the direction they want to take PvP and Ranked PvP. 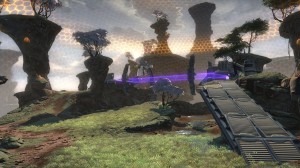 Trivia questions: Name three Hutts in SWTOR. The answer Karagga, Toborro and Oggurobb won shirts with either the Imperial or Republic logo. Name two instances where companions of different classes meet up in cut scenes. The Doc/Kaliyo and Risha/Vette answer won what looked to be the SWTOR encyclopedia. The real stumper was to name the three Darth titles for the Sith Inquisitor story line, awarded for going either light, dark or grey. The first person gave light and dark, but the winner was able to name grey to complete the answer, winning Star Wars logo bookends made by Gentle Giant.

While it wasn’t really trivia, the prize for who traveled the furthest to be at the meetup was won by two Australians, beating out someone from Okinawa, to win the Empire/Republic shirts and a SWTOR novel. 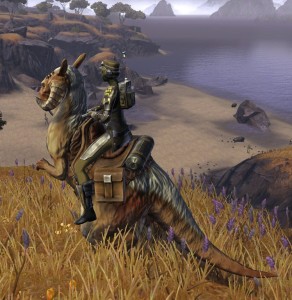 That marked the end of the Q&A session at about 8:35pm or so. The rest of the time was for more drinking and merriment while the devs on hand would mingle and field questions on a personal level. No one asked questions on the Tauntaun mount, as the pictures of it were sitting on the USB thumb drives in our pockets, so no one really knew they existed yet. I had a blast at the event, and would recommend that if you have the opportunity to go to one, do it!