What a difference a year makes for SWTOR. This time last year players were basking in the fairly recent launch of Game Update 2.0 and Rise of the Hutt Cartel. The final iteration of the initial level 55 operations were in full swing, with Nightmare Modes of Terror from Beyond and Scum & Villainy available. With only limited information available about 4-man Warzone Arenas, server transfers allowed for a golden age of ranked 8v8s as teams gathered on PvP servers. The super secret space project was being whispered about with all the hope of an open space paradise reminiscent of the Jump to Lightspeed expansion in Star Wars Galaxies.

This Community Cantina had a feel of “what next”… and unfortunately no major reveal for the second expansion was on the cards, or the flash drive. Eric Musco handled the mic with ease, fielding questions for Bruce Maclean, Courtney Woods and Tait Watson. Instead of the “fix the bolster” rallying cry of last year, this time it was “give us cross server queues”. I’m sure Eric must have been asked that in every conversation he had while mingling with fans. The short answer is that they know about the demand, and understand the necessity for providing a healthy population for both Ranked PvP and PvE. If cross-server queues are implemented, they would be for Operations, Flashpoints and Warzones. 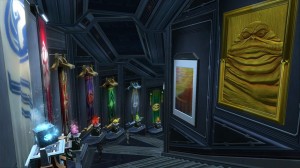 With player housing hitting the PTS the day of the event, the crowd’s anticipation was palpable with no real negativity to the promise of decorating to your heart’s content, though the guild ship price tag of 50 million credits was shocking to some. With the guild conquest side of Game Update 2.9 still to be unveiled it’s hard to judge the excitement levels for that side of the patch.

I got to have quite a few questions with Eric before and after the Q&A. With the implementation of hooks and players having the ability to edit their Strongholds’ environments, I asked whether it ever be possible to have user-generated content. Eric’s reply was one of the few things he could give a definitive “never” to. So SWTOR will never have a tactical Flashpoint similar to KDY but with the variety of whatever the playerbase could design.

Legacy storage and the pros and cons for BoP (bind-on-pickup) items being able to be transferred was a question asked at the Q&A. Apparently it’s still being debated within BioWare.

As a master craftsman myself, I asked if we could legacy craft, as in send a companion of an alt who knows Slicing or Biochem on a mission and have the material or crafted item show up in legacy storage. Eric said there are no plans for that at the launch of Game Update 2.9, but that it was a great idea for a perk. Hopefully legacy crafting could be implemented with less effort than the fabled smart phone app that could run crafting missions out-of-game.

More love for the Collector’s Edition vendor on the Fleets was requested; it’s likely they will get a decoration or two added to the vendor, much like dyes were added back in Game Update 2.1.

Story teaser that includes spoilers for the conclusion of the Jedi Knight and Sith Warrior class stories
I also got a cool teaser out of Eric with regard to the Knight and Warrior story lines. They appear to contradict each other, with the Knight killing the Emperor and the Warrior getting the mail sent saying that the Wrath should be ready to do the Emperor’s bidding. Eric simply said, “they are both right,” and indicated that the Emperor will indeed be featured in the story at some point in the future to resolve the issue. Knowing that some sort of SWTOR lore may have a tie to the upcoming Star Wars Episode 7 movie coming in 2015, how cool would it be if the Emperor in SWTOR is an influence on whatever bad guy Luke, Han and Leia have to deal with? 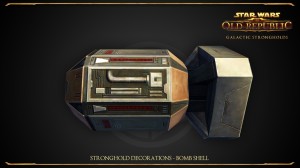 On a personal note, I just wanted to say that OotiniCast is awesome, and it has been a blast being able to PvP with Redna on The Bastion a few time. I got burned out and took over a two month break at the start of the year, but OotiniCast and a server transfer to The Bastion have helped me reclaim the excitement of how good an MMO SWTOR really is.