The year was 1998, Christmas day; I was seventeen. My parents gifted me with a few games, per my request, for Christmas. One of them would go on to be one of the most influential video games of my life:  Metal Gear Solid (MGS) for the original Playstation. For the younger reader, back then was what I would call ‘The Age of Consoles’. At seventeen I was more enthralled by story, and less so with maniacal button mashing. I wouldn’t give credit to MGS for that transition; that path was laid by Final Fantasy VII. Nevertheless, MGS became the game that I would later use to judge all other games by.

Playstation had just released controllers with the ability to vibrate. This is how far we have come in fifteen years. Metal Gear Solid exploited the vibration ability before most games, though this is not why this game imprinted on me. Other than the novel vibration on the controller, the game had another feature that applies to this article. MGS was fully voiced by amazing actors. This made it a clear leader in storytelling back in 1998. In contrast with the other biggest game of that year, The Legend of Zelda: Ocarina of Time, MGS was clearly many years more advanced. The recent discussion on OotiniCast podcasts about voice actors in Star Wars: The Old Republic (SWTOR) inspired me to write about MGS, and its connection to SWTOR.

I knew one voice had returned from my beloved teen gaming years as the male Jedi Knight class voice. This was the most important voice to me and the main character in MGS, Solid Snake a.k.a. David, voiced by the very talented actor, writer and soon-to-be-director, David Hayter. 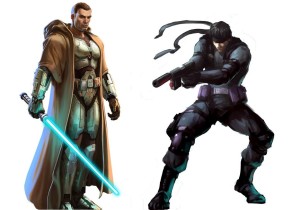 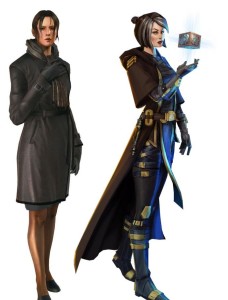 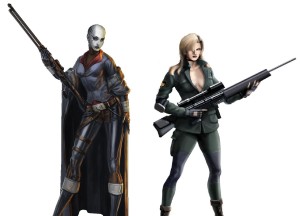 The many connections lead me to believe that BioWare and EA did a really thorough job looking for talented voice actors. In my opinion, SWTOR is the apex of voice acting and storytelling in video games. I do hope that the rest of the voice actors from MGS eventually find their way into SWTOR.