A quiet week, but we still find plenty to talk about, including Patch 2.10.2a, the rewards for Ranked PvP Season 3, and last week’s livestream discussing the combat changes coming in Game Update 3.0.

Congratulations to this week’s winner, Vescent! Thanks to Topps, Sabo, T’chuk, Bara-dur and Mariachi for entering.

Thanks to Justin for his most generous donation! We will indeed have drinks in your honour, sir.

If you want to find out more about @HamSammich509‘s Jawa Junk Yard, see his thread on our forums.

To help provide a little Cartel Pack purchasing money for the show, please shop at Amazon by going to ootinicast.com/amazon.

If you feel moved to give us a review on iTunes, which would help new listeners find our show, you can do so by following ootinicast.com/itunes.

To find out more about our Ootini Cantina, goto ootinicast.com/cantina.

While it is apparently possible to purchase the 14,500 Cartel Coin bundle on the official site and in-game for $US99, it isn’t working for Teo. Bearyman sent us the following showing how it should look from in-game: 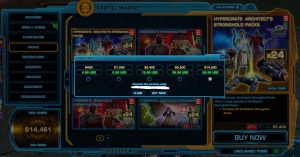