After covering the light news from this week, we revisit what to expect in Game Update 2.3: Titans of Industry, which is due to arrive on Tuesday!

Congratulations to this week’s winner, Ki’el Over! (Yes, we know.)

George Lindsesay (@wannabePhD) is hoping to get ranked warzones happening again on The Harbinger on a regular basis. See his thread on the official forums for more information.

Thanks to Pathlight for his kind words about the show!

The new Razer Naga MMO gaming mouse is here, including a left-handed version!

The scoreboard from the warzone in which Moff Chong demonstrated his unquestionable prowess: 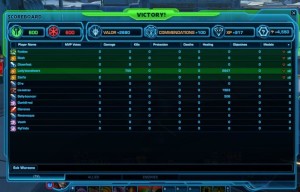 Game Update 2.3: Titans of Industry is due to be deployed next Tuesday 6 August. We discuss what it will bring, including:

You can find the PTS patch notes here.