Sand stays. All else changes.

-Iziz, from Knights of the Old Republic

In every Star Wars parody that I have ever seen, one species that always gets included is the Jawa. In Spaceballs they were called Dinks, most likely in reference to the cadence with which they sang as they marched across the dunes. Thumb Wars referred to them as “The Freaky Little Hooded Creatures”; an accurate if not flattering title for the little sentient beings. As we all know, our very own Chill and Teo decided to name their Old Republic podcast after a common Jawa cry. At first glance, Jawas might seem as though some Black Mages had stumbled into Star Wars from Final Fantasy, but like so many other parts of the Star Wars universe, once you dig into the lore surrounding them, a very interesting story emerges. 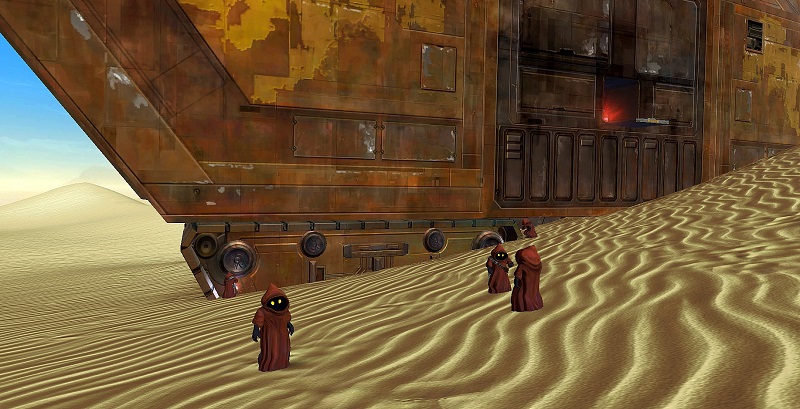 Even though some models of protocol droids cannot abide these disgusting creatures, Jawas have, in my personal opinion, always seemed rather cute. The average height of an adult is one meter, with an average mass of around 30 kilograms. The most distinguishing characteristics are their brown hooded robes and glowing yellow eyes. In similarity with their cousins the Sand People (more on this later), Jawas do not take off their robes—at least not in public. Through the study of corpses and skeletal remains, xenobiologists have discovered that under those robes Jawas are gaunt, rodent-like creatures with sunken faces. Jawas are known to dip their robes into a special solution that helps them retain moisture in their native environment. This solution is foul smelling to most other species. The staple of their diet is a round and yellowish, tough-skinned melon called the hubba gourd. Tasting sour to most other species, Jawas find them delicious when roasted. They also hunt carnivorous beasts on Tatooine called Squills for their tough pungent meat. The Jawa homeworld was Tatooine, but Jawas—like many other species in the cosmopolitan Star Wars Universe—can be found on many planets including the junk planet, Raxus Prime, which is about as close to Jawa paradise as I can imagine. Jawa life expectancy is around 80 standard years.

Among themselves Jawas speak Jawaese. This language is not only made up of sounds the Jawas make, but also scent-producing pheromones. If the Jawa speaking gave off a bitter smell, then that in combination with the words he said might have a different meaning than if he gave off a sweet smelling scent. Jawas learned early on when meeting other species (mostly to trade for their truly interesting goods) that this way of communicating was ineffective when conversing with non-Jawas. The ever enterprising Jawas developed the Jawa Trade Language, which is comprised of only the spoken component of Jawaese. Jawas cannot speak Basic because of limitations in their vocal chords, a limitation shared with Wookies.

Jawas are a communal, compulsive scavenger species whose unofficial motto is “not to look for uses in a salvaged item, but rather to imagine someone else who might find a use for it.” Jawas have an uncanny ability to get an item working just well enough to sell, a trait that has got them the stigma of being scavengers and thieves. Jawas actually enjoyed being referred to as such. 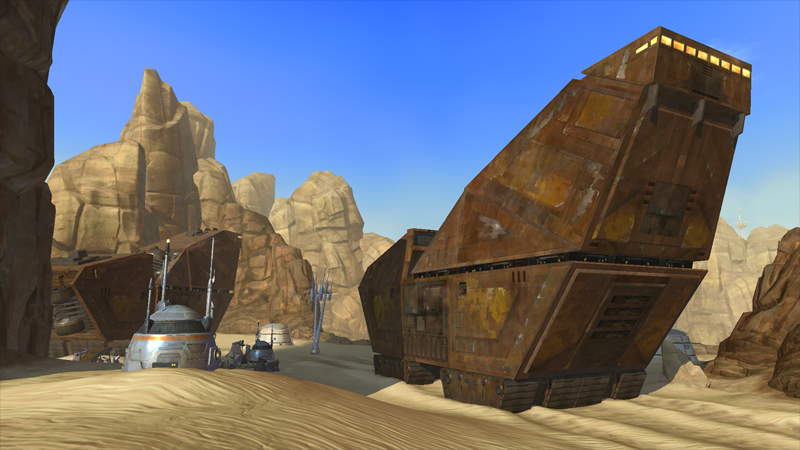 They live in clan families, each with their own territory for scavenging and living. In the Knights of the Old Republic, we learned the story of how the Jawas got the Sandcrawler machines they became known for. For anyone who has not played that game, Czerka Corporation brought the Sandcrawlers to Tatooine when attempting to mine the planet, but after finding the ore was sub-par, they abandoned their Sandcrawlers to the planet, rationalizing that it would cost more to take them off world than to just leave them rusting out in the Dune Sea. The always opportunistic Jawas scavenged the Sandcrawlers and made them theirs. Each Sandcrawler was led by a Clan-Chief, who was always male. The overall operation of the clan was overseen by a female Shaman. One of three criteria must be met to become a Shaman: possessing some Force ability (able to perform magic), overcoming an illness accompanied by a hallucinatory vision, or being trained by the current Shaman to take her place. Shaman were believed to be able to tell the future, and to perform spells, hexes and blessings to protect the clan. The Shaman was one of the most protected Jawa in the clan and as such was protected in the clan’s fortress and so did not travel in the clan’s Sandcrawler. Once a year before the storm season of Tatooine, all the clans gather together in an annual swap meet. Here all the Jawa clans gather and mingle, trading with each other and attending to any inter-clan business. Navigation data on the ever shifting sands of the desert was also exchanged, along with arrangement of marriages to ensure the continued genetic diversity of the species. 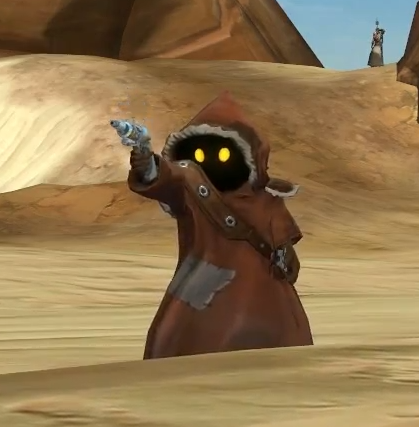 I feel that I would be doing my readers a great injustice if I did not mention the most popular Jawa in Star Wars: The Old Republic: the ranged tank companion for the Bounty Hunter, Blizz. If you have not yet played the Bounty Hunter story and do not want this companion’s background to be spoiled, please skip this paragraph. Blizz was hired by a scavenger crew lead by a man named Slam when the crew was on Tatooine. The young Jawa eagerly joined them as a “ferret,” getting into places where Slam and his crew could not, and was allowed to keep a share of what he found. After being with Slam’s crew for a few years, they went to work for the White Maw pirates on Hoth. The young Jawa was ecstatic about the planet’s “white sand,” and kicked snow up all around him while playing in the snow. Slam saw the miniature blizzard the little guy had made and jokingly called him Blizz, or little blizzard. Blizz liked the nickname and used it from then on.

Lastly, I want to discuss the origins of the Jawa. In my research I have found three theories as to their evolution. The first is that they (like the Sand People) are descendants of humans. The second theory is related to their rodent-like appearance, and says that they evolved from womp rats. This idea I got from The Official Guide to Alien Species, and while it is the most outlandish to me personally it is a theory from an official source. This same book states that they and the Sand People have certain genetic markers that link them to an earlier sentient species on Tatooine, the Kumumgah, which leads to the third theory that is tied into the mythological history of Tatooine itself.

During the time of the Rakata Infinite Empire, a species called the Kumumgah lived on their lush homeworld. They defied the Rakata’s authority over them. The Rakata decided to make an example of them, and so blasted their homeworld from its orbit. The Kumumgah’s native planet was transformed into a glass-covered world. Over the millennia, the glass crystals eroded down into the sands that covers all of Tatooine today. The surviving Kumumgah were decimated and scattered. Ultimately the species split into two groups. One group struck out into the wilderness, eschewing all technology, analogous to space age Amish. This group became the ancestors of the Sand People. The other group retreated into the ruins of the original Kumumgah’s ruined cites. There they scavenged as much as they could to survive, establishing a culture that would eventually develop into one of dinky little freaky hooded creatures.

As always, you can follow me on Twitter using @DarthKenji. Until next time, may the Force be with you all.