[Editor’s note: I’d like to welcome another new writer, Jacob Hausman, to the OotiniCast team. We hope you find his guide useful! -Teo]

This guide’s purpose is to describe the perfect hybrid Player vs. Player (PvP) Shadow (Republic) or Assassin (Imperial) tank. Shadows are one of the best classes in Star Wars the Old Republic (SWTOR) because they can dish-out stuns, provide sustainable damage, and rely on quick movement throughout the battlefield. 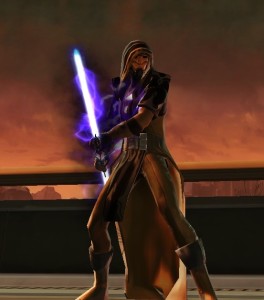 “If the tanks succeed, then victory follows.” (Heinz Guderian)

PvP is a dynamic game-play type that allows for many different successful builds.  However, most times, it comes down to the same well-established composition for a team to be successful.

As a shadow tank, your job is more often than not a complex one. Many of SWTOR’s maps revolve around capturing nodes to obtain objective points. This is where the Shadow shines. Moreover, as a front line battlefield tank, your primary role is to keep the healer protected with Guard and taunts. These both lower the damage that the healer takes, thus allowing them to heal the rest of the team rather than focusing on keeping themselves alive. But it extends beyond that. While guarding is simple, the best kinds of tanks manage targets’ Resolve and make effective use of their own stuns to keep top DPS classes at bay. Here are some highlights on what a shadow tank should be doing in a warzone (ranked or unranked):

The build I’ve selected for this type of shadow is Enduring Shadow. It’s designed for maximum control, survivability, and speed.

Abilities: Battle Readiness (Overcharge Sabe), Force Potency (Wrelessness), FiB (Death Field), and Force Breech (Lighting Charge)
Usage: When three or more targets are grouped together, use this combination for nearly guaranteed critical hit and increased damage. I can sometimes do 20k in a few seconds (as a tank)!

Abilities: Force Pull, Spinning Kick (Spike), and Force Stasis (Whirlwind)
Usage: If I see an unstoppable DPS character I will run nearly 30 meters away from my healer and pull, stun, and lock down the target. Usually I only do this if the player has used their CC breaker, that way I know they’ll be sitting suspended in the air for 8 seconds. Yeah, you’re that guy!

Abilities: Resilience (Force Shroud) and Force Cloak
Usage: Use this when you have zero DoTs on your character for a quick escape. Force Cloak alone isn’t very useful because it can be broken, but combined with Resilience it’s a near-perfect exit plan.

Abilities: Spinning Kick (Spike), Force Stun (Jolt), Shadow Strike (Maul) (if proc up), Project (Shock), Double Strike (Thrash), Force Slow
Usage: This is a bit hard to pull off, but you can melt a single target. Try to manage your proc and wait for both stuns to be up; once they are, execute this rotation for mega single target damage. If they get away, wave at them and use FiB for the kill! You are for sure that guy.

Abilities: Force Wave (Overload), Force Potency (Recklessness), Telekinetic Throw (Lighiting Strik) (until range is closed), Spinning Kick (Spike) and Force Lift (Whirlwind)
Usage: This is a long one but it’s designed to keep a melee target at bay. If they close range immediately punt them back, pop Force Potency to get a near auto critical and start throwing pebbles at them with Telekinetic Throw; this will slow down their approach. Once they are in range, knock them down, and depending on their Resolve, Force Lift them for eight seconds to call reinforcements or grab a health pack.

Abilities: Spinning Kick (Spike), Force Slow, Force Stun (Jolt), Mind Crush (Crushing Darkness)
Usage: Assuming the target has zero resolve, use this combo to put a lot of DoTs on a target. Then go into the normal rotation for more damage when they come out of the stun.

I’m not big on “rotations”, or a set way of attacking an opponent. If you look above, the Combos section is full of useful ways to attack in a variety of settings. With that said, a basic understanding of when and why to attack is necessary for this guide.

When fighting a single opponent, the idea is to do damage without taking any. Sound simple? If attacking a melee target, use long range abilities; if ranged, pull closer to do damage. The following assumes that you are attacking a medium-ranged target and does not include CCs, as they are situation-dependent.

Another thing that stands out is why I haven’t put defense or shield stats in my build. These stats are for the most part broken in PvP. I’ve seen builds with heavy defense and shield get melted down because they couldn’t kill anything. PvP is about balance, and doing damage along with taking it is a major part. This build is about survivability while still putting out damage.

Lastly is the misunderstood concept of Accuracy.  This is a very important stat because everyone has a base defense of 5%. Most DPS classes use 150 points of accuracy just to reach this baseline number. Anything higher than this has a chance at penetrating armor, thus giving bigger hits. Given that it’s very easy to get to 75% Surge, with any more than that wasted, getting 50 points in Accuracy instead is a wise choice.

Below is a sample itemized list of items you will need to maximize the build. Assuming you have collected all the Datacrons, are using an Exotech Fortitude Stim, and have all the buffs, this will put you at 24,000 hit points, 1390 Expertise, and 500 melee bonus damage. This blended stat distribution will have a near-perfect balance of survivability and damage.

For those of you familiar with Ask Mr Robot, here is a sample build with my suggested spec and gear: Deltia ranked tank.

Also of note, I use the item set bonuses from the tanking pieces, giving you added incentive to guard a target because it grants a 5% bonus to your damage. Did you know you can guard an NPC at the start of the match for this bonus? Try it the next time you play Civil War if you’re going to guard a node.