We find out what’s coming up between now and Game Update 2.9 in Bruce MacLean’s roadmap. In our discussion, we do some lightweight theorycrafting, comparing primary stat vs power augments, and whether there’s a point at which crit becomes more valuable than power.

Congratulations to this week’s winner, Nightmare of the Pot5 server! Thanks to Darth Malvictus for entering.

Chill’s interview with Njessi (@HawtRepublic), author of the Hawtpants of the Old Republic blog, is now available.

The Galactic Gamers Coalition podcast can now be subscribed to in iTunes.

Kranitoko is back with another video where he opens the latest Hypercrate, this time containing Hotshot’s Starfighter Packs. It includes another awesome introduction!

Our Ootini Knights guildmate Darmist is hoping to organise a non-progression raid group on the Republic side of The Harbinger. See this thread in our forums for more information. 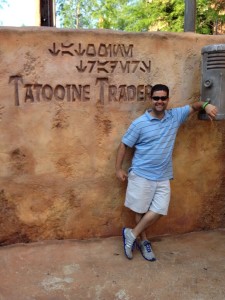 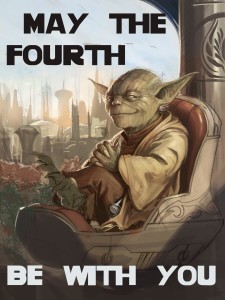 “There is no passion, there is serenity.”

Two topics were covered during the discussion: primary stat vs power augments, and revisiting (and perhaps rehabilitating) the value of crit.

We received an email from Oofalong, the author of the Theorycrafting series on Dulfy’s site, giving us a detailed explanation of how to make an informed decision about whether to stick with primary stat augments, or switch to Overkill (power) augments. He provided this spreadsheet to support his reasoning.

Our guildmate Terg (@TheTurg) subsequently determined that once a certain level of primary damage was achieved, and assuming at least 70% Surge, crit actually became more valuable than power. He provided the following graphs in support of his assertion: 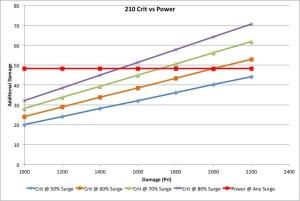 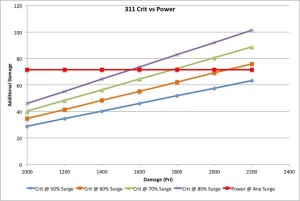 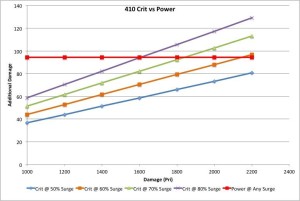 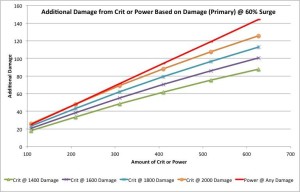 Addition damage from Crit or Power at 60% Surge 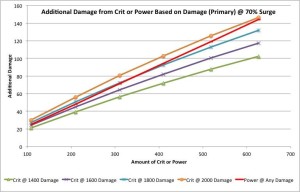 Addition damage from Crit or Power at 70% Surge 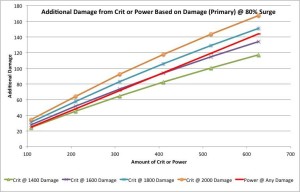 Addition damage from Crit or Power at 80% Surge