The image from the official site that caught Hyp’s attention:

Thanks to Radio Paragon for including us in their line-up!

Chong wonders whether the tank dancer is new: 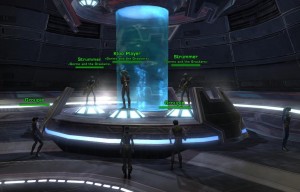 Matt (roguish98) emailed us about whether our expectations for endgame content should be eased to allow for more of SWTOR’s most excellent story content.

Daryl (also known as Wolfgangamadeus, Hansgruber, Fritzdourdan, Karlurban of the Thirteenth Legion guild on the Ebon Hawk) provides some advice regarding the Commando’s Assault spec.

We respond to Facebook comments from Greg C and William C, and a comment on episode 61 from Michael Sawyer.

Next week’s Sarlacc Digest will be a discussion about stats, probably the first in a series. Redna will start with the key offensive stats. We will be live-streaming the recording of the show, with more details available early next week on ootinicast.com/live.