In the news we cover Game Update 4.0.4, the now-solved GTN search issue, the sudden impending unavailability of the new BSG packs, and much more. We also revisit Kimi’s email from last week, with followup from Kuze, Blachloch and Sir Salisbury, and an enlightening explanation from Chill.

Congratulations to this week’s winner, the Duke of Etiquette! Thanks to Indy-Solo and Uwen for entering.

Thanks to our latest Ootini Patrons: Char Ell and Eric Z! Thanks also to both for their very generous donations!

Our guildmate Djredd is organising a series of Ootini Events for February.

The Ootini Hunt –  This will be a scavenger hunt to acquire certain items from across the galaxy and the first one to return will be rewarded with 1,000,000 credits. This will be a Lvl 60+ event because you might be sent to planets that were featured up to SoR. Obvious requirements will be having a ship to traverse the galaxy and to have a minimum of about 20,000 creds (subject to change) for the purchase of items required for the hunt and for space travel.

The Ootini Race! – This will be an event that will consist of  two pod races that will take place on two pre-selected planets. Each winner will receive 500,000 credits. Requirements are that you MUST own a pod racer mount and you must be over Lvl 45+ (because Belsavis MIGHT be one of the locations). Having all of the planet maps explored will be a bonus to taking part in this event but it is not a requirement.

The Ootini Cron – This will be a platforming challenge to reach two datacrons on pre-selected planets. Each winner will receive 500,000 credits. Requirements will be Lvl 55+ and mad platforming skills. 🙂

These events will be Ootini Knights only and if there is an overwhelming response to the events then I will run them on Ootini Rage in March 2016. The Saturday events will take place at 8pm EST but participants are asked to log in and form up in the raid group before 7:45pm for debriefings on each night. This event is limited to the size of the raid group, so the first 23 people to show up will be able to participate. (I will be the 24th person as I need to see where everyone is at all times). All of the details will be given out on the night of the events including objectives and rules. Mumble will also be a plus for communication between me and the participants but it is not a requirement. I estimate that these events will last approximately one to two hours. 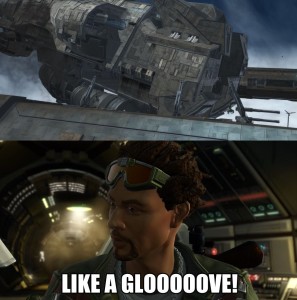 We follow up on Kimi’s email from last week, with emails from Kuze and Blachloch. Kuze refers back to our interview with Kimi in episode 227. Blachloch links to this Forbes article.