In the news, there’s the final word on the Ravagers exploit, more detail on what’s coming next week in Game Update 3.1: Conflict on Rishi, and lots more. Then in our discussion we walk through the four hard mode Flashpoints introduced in Game Update 3.0, with a few tips to make them that much easier.

Congratulations to this week’s winner, CapsSlapshot27! Thanks to Ryenke, Sabo, Tim Rogan and Nightmare for entering.

Here’s the full tip from CapsSlapshot27 for the Underlurker encounter in Temple of Sacrifice:

For those of you that have less experience on fighting Underlurker, here are some easy tips to follow to improve your groups progress on killing him.

-Pop raid buffs when dps jump in initially. This is a 4:50 enrage, but the enrage doesn’t hit as hard as you would expect. If you are lucky, your group can get 2 sets of raid buff on the boss. In addition, if a commando uses his alacrity buff first, then all other raid buffs are popped in the next 10 seconds, all those raid buffs will have a shorter cooldown, due to the increased alacrity.

-When the dps are attacking the adds, have the whole group, minus the main tank, behind the add you are attacking, then when add #1 is down, move behind the next add. This will minimize damage done to the group, and will make aoe heals easier for healers.

-Dps should all be attacking the same add, and know what order they are killing the adds. A recommended strategy for deciding which order to kill the adds is, on the first add wave, kill the adds closest to the entrance, then move towards the back add. When the boss has finished his plus mechanic, which ever add you are closest to, whether it be the closest to entrance, or the closest to exit, should be the dps’s first target and move in a line toward the opposite add.

-Try to have the whole group, minus the main tank stand behind one rock, or 2 rocks close together, and the main tank standing behind a rock on the other side of the room, this will allow people to predict the orientation of the plus mechanic

-If your group has a Vanguard as a tank, use riot gas right before he channels rage storm. This make a significant amount of the damage dealt by rage storm miss anyone struggling to get behind a rock

-The tank on the boss should stay away from the adds, as they will take an added amount of damage which will be difficult for the healers. As a vanguard, I stand 10 meters away from the add that the dps will down last, have the boss in between me and the add, and use ion storm (conal attack) as often as possible to do damage to the boss, as well as to the add.

-There will be 5 sets of adds, 5 collapses/rage storms, and 5 pluses that you will have to deal with before the boss enrages. It is recommended to only skip the 5th set of adds but still perform the collapse and plus mechanic for the 5th round.

-If your group is having a bit of trouble dps-ing the boss, the off-tank can switch to a dps, as 2 tanks are not a necessity on this boss. This is not something a group should rely on every week, but this will improve dps a bit if you choose to use this method. Keep in mind on the plus phase, anyone can stand behind the boss, it doesn’t have to be someone with a high threat, as I have experimented and threat levels don’t matter (excluding the maintank). I personally would recommend a dps with heavy armor stand in the back though.

The last tip is more of a “check” this is a recommendation of what your groups stats should be for clearing this boss. Keep in mind you can have lower stats and still clear it, but these are RECOMMENDED numbers
-Tank Mitigation rating 3400 (mitigation rating calculated by shield+absorb+defense)
-No minimum offtank mitigation rating
-Both tanks pulling close to 1400 dps
-Each dps pulling 3500 on dummy
-Healers with gear rating of 9200+ (our guild totals this number as mainstat+power+crit+surge+ alacrity+forcepower or tech power)

We’d like to recommend The Usual Podcast, a new show featuring long-time community stalwart Marshall Carr and his friend Will. It will cover SWTOR, Star Wars in general, and pop culture.

Another new podcast is Casual Core Radio, starring Drew (Geldarion) and Joe Foran. It’s a general gaming show discussing SWTOR and other games (mainly MMOs) that they are playing.

For anyone interested in the SWTOR economy, and extracting credits from it, we highly recommend the new blog swtoreconomics.com. You can follow its author on Twitter using @SWTOREconomics.

Swtorista has created an image gallery (more details about it here) showing a number of secret (generally unknown and/or hard to obtain) pets, which includes notes on how to get them.

Marisi of the progression guild Zorz has created an online non-real-time combat log analysis site called Parsely. You can read all about it here.

It seems that Turg thinks that Sages are particularly popular in PvP at the moment. Can’t really see why: 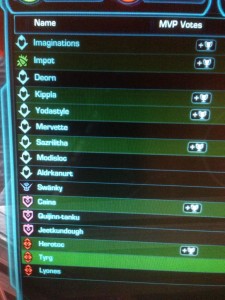 Chinn’ook and Damon Homer both recommend that you check out the Star Wars-themed Humble Bundle. You’ve got under two weeks to grab it!

Chong has discovered that Cathar eyes glow in the dark: 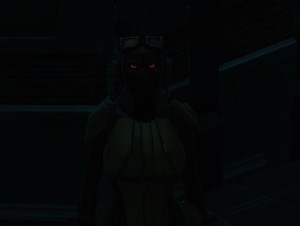 Courtesy of Reddit user Hahawl, it seems that a new character species has made a surprise appearance on the PTS! 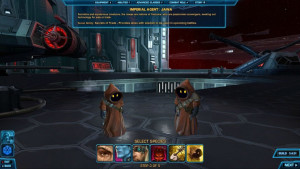 Kuze has a plan for rescuing the now not-to-compelling Contraband Slot Machines:

Just by looking at this setup you can clearly see some issues. The functionality of how the slot machine works should have been developed based of the value, level, and number of rewards. After the basic design was completed the win ratios should have been applied. This is the format I will take below. First I will layout the game design and then give my quick opinion of ratios.

My design would have 4 options not 3.

Ratios: I don’t have time at this moment to give specific percentages but I would definitely make the jackpots hits rare and keep the special reward ratios very low.

Given this design Bioware could breakdown the rewards in such a way that the machines would stay useful and fun without disrupting the game play for other people. Having a more diverse reward system keeps things interesting and gives Bioware a little more room for tweaking ratios. A weekly spend limit by account or individual player debuff can be injected if needed to keep normal players, bots, and gold farmers from going overboard.